Update: Most of the patches mentioned here are not necessary anymore, since they have been addressed by the v1.0.0-rc.5 release of the Ionic Framework. 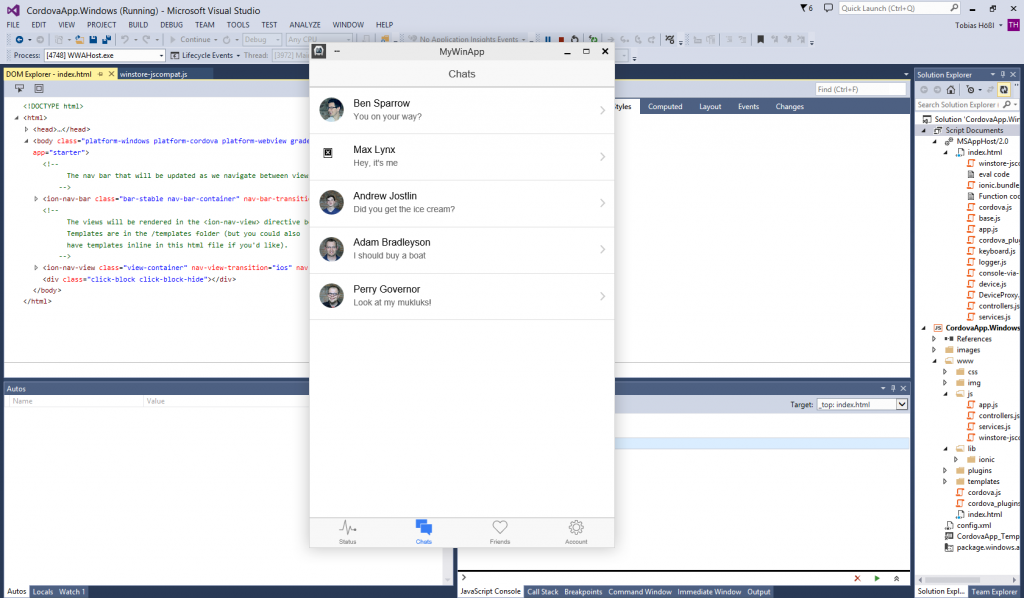 The Ionic Demo, running as a Windows desktop App

You will need at least Windows 8.1 to develop apps for Windows 8.1 and Windows Phone 8.1. The free technical Preview of Windows 10 works as well (except for the App Certification Kit, which is needed when submitting an app to the store).

As an IDE, the free Microsoft Visual Studio Community 2013 with Update 4 (download) works perfectly. When installing Visual Studio, it is important to include all optional features (ie. the Windows Phone 8.0 SDK and the Tools for Maintaining Store Apps For Windows 8).

Other programs I needed:
– The Git Bash
– NodeJs

Problems and getting around them

Angular doesn’t work with Windows Phone 8.1 by default, as Angular relies on the innerHTML-property, which is not accessible on Windows Phone 8.1 for security reasons. Trying to start the blank Ionic app results in the following message:

0x800c001c – JavaScript runtime error: Unable to add dynamic content. A script attempted to inject dynamic content, or elements previously modified dynamically, that might be unsafe. For example, using the innerHTML property to add script or malformed HTML will generate this exception. Use the toStaticHTML method to filter dynamic content, or explicitly create elements and attributes with a method such as createElement. For more information, see http://go.microsoft.com/fwlink/?

MSOpenTech provides a shim that almost solves the problem. The file winstore-jscompat.js needs to be included before ionic.bundle.js.
However, the shim as it is does not completely solve the problem, as there still occurs an exception that leads to a blank page:

Replacing the „cleansePropertySetter(„innerHTML““ block in winstore-jscompat.js by the following code (as suggested by Arjan Snoek) really solves the problem:

Now, the app starts, even the icons work perfectly (unlike with Windows Phone 8.0) and the Tabs are working too.

2. Broken Links in the app („Search for app in the Store“)

When trying to open a person in the „Chats“ tab of Ionic’s demo app, the message „Search for app in the Store“ appears and nothing happens inside the app.
This happens because of the URI Scheme of these links: „unsafe:ms-appx://[appid]/www/index.html“. It can be solved by registering the URI schemes with Angular, by adding the following line to the .config-Function of app.js (line 25ff in the demo app):

ng-show and ng-hide hide elements by adding the CSS-class „ng-hide“ to the affected elements.
It seems like the necessary stylesheets are not added to the document automatically, so we need to add the following rule explicitly in the stylesheet (eg. in css/style.css):

4. Scrolling does not work

Unfortunately, this problem seems to be much more complex and I did not find a real solution until now.
However, adding the following CSS-rule to the stylesheets enables the browser-internal scrolling, which works surprisingly well:

This is just a dirty hack, though, and probably breaks a couple of things.

5. Not fixed yet: Back Button

With Windows Phone 8.0, listening on the „backbutton“ event was pretty simple, just as with android. On WP8.1, this event is not triggered anymore.
I haven’t figured out how to enable it yet. Any hint would be appreciated.

6. Not fixed yet: Hover/Touch effect is permanent

When starting a touch gesture on a link without clicking it (e.g. when starting to scroll), the hover effect is not disabled afterwards.
This is probably related to the scrolling issue.